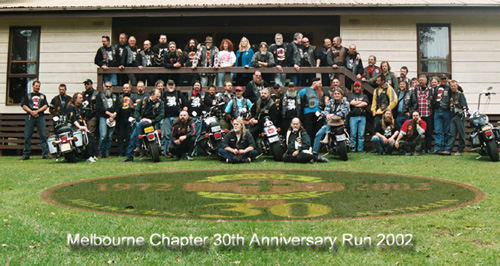 God’s Squad was established in the late 1960’s in Sydney and founded on a broader basis, under the leadership of John Smith, in Melbourne 1972, where the Club Colours have been flown ever since. The Club primarily exists to minister among the ‘outlaw biker fraternity’ and associated groups, where it is an accepted and relevant expression of the Christian Church. Since it’s birth, out of the counter culture Jesus movement days of the late 60’s it has continued, over four decades, to devote its efforts amongst those on the fringes of society.

God’s Squad has flown its colours in Melbourne for over 30 years – in Sydney a bit longer. Some faces have changed. Brisbane, Sydney and Western Australian Chapters have come and gone to be replaced by Tasmanian, (Launceston), New Zealand and a new Brisbane Chapter, as well as flying colours again in Sydney and in the United Kingdom.

But our faith and commitment remain stronger than ever. You need a faith to live by and a friend to stand by. Like Jesus, who we follow, we are committed friends of the outcasts of this world. We are friends, not to manipulate our mates to faith – but because we talk and live a faith that is free for all. True love is no weak sentiment – for Christ it led to crucifixion.

To all our mates on the bike scene, we want to say on our Anniversary, we are a club that exists not for ourselves, but for non-members. If you ever need an honest believing friend, we are here for you and so is Christ.

Cheers and God be with you.