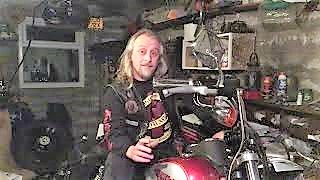 Warmest greetings from South Wales. At this time of the year in this part of the northern hemisphere, we’d be enjoying some early warmth from the sun on our backs after some cold winter miles. However, this year amid the Covid-19 pandemic, my bike and I guess yours too, won’t actually be travelling very far at the moment due to lockdown restrictions. Usually when we go through tough times, we naturally want to gravitate towards each other, and reach out and support someone – but the current circumstances make that difficult to do, either on the road or in clubhouses. We’re all learning how to do that differently.

I’m reminded that the church is more than just a building. It’s always been about people, well at least it should be. Similarly for those of us in motorcycle clubs, we know how important the clubhouse can be, but the heart of the club is in its members – in people. As our churches, clubhouses and large parts of our communities are closed down at the moment, bringing how we normally function to an abrupt pause, this pandemic will quite possibly test what we have together as communities of people in new ways.

We have just celebrated Easter together – a significant festival for us a Christian Motorcycle Club, that centres around the death and resurrection of Jesus Christ. It recounts a story of honour and courage, where the man who said, “Greater love has no man than to lay down his life for his friends,” did just that.

But it is also a story of betrayal, disappointment and confusion. There were biased unjust courts, a brutal execution, and brothers disappearing in to the distance. One of those brothers, Judas, has always fascinated me. Part of me would like the opportunity to look into his eyes, half hoping to see the devil, but in reality I know I will just see a reflection of myself – somehow complicit, along with everyone else, in putting Christ to death. For the disciples and their associated group of travelling companions, they hadn’t expected it to end like this. It was never supposed to be this dark.

Even after some of the women reported that the tomb was empty, they dismissed their accounts as nonsense and any talk of resurrection from Jesus in the days and weeks before, was lost in their confusion. Their dreams of deliverance from Roman oppression and an alternative way of life was now in pieces as two of the number headed home from Jerusalem to Emmaus. Luke 24:13-35.

As they walked the seven miles, they were joined by a stranger, or maybe as they thought, a foreigner, because he seemed to have no idea what had been going on that weekend. As they poured out their pain and confusion, the stranger then took stories from their own history and explained in great detail what was actually going on. But it was only at their journey’s end, as they shared food together, their eyes become fully open. They realised the stranger who had accompanied them, was in fact the risen Christ – now present and serving them food. Jesus had not forgotten them, nor left them in their confusion.

This is also a story of hope therefore. It was so much more than an honourable sacrificial death. There was a righteous heart that prevailed amid betrayals of trust. Though he was dead, he was now alive and back on the road with his mates.

Right now, these are frustrating days. As a club, we have always held the belief that we do not simply exist for the benefit of our own members – we exist primarily for the benefit of our non-members. We have done that for decades, on the road and in clubhouses globally across the political divides. We have celebrated milestones with friends and learned to mourn losses with each other.

Like everyone at the moment, we are learning to understand what all this looks like during this pandemic. But ultimately, we continue to be here for you, and so does Christ, whatever the present circumstances are. Be assured of our prayers and our support in whatever way we can give it. In the meantime, take good care, stay safe and look out for each other, especially those amongst us who are more vulnerable to getting very sick during these days. On behalf of us all in God’s Squad, cheers and God bless.

To watch a video of this message go to this link on our youtube channel.