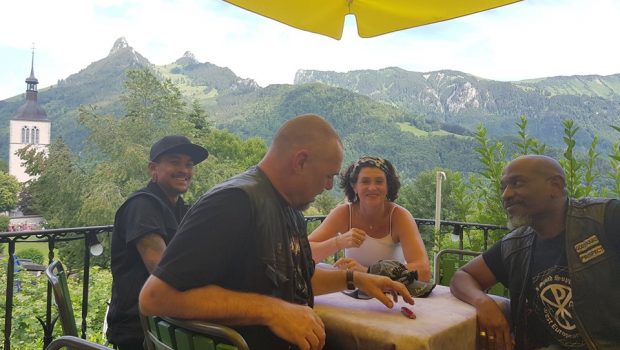 Greetings once more from Leicester, as we look at a passage of warning, encouragement, and hope, from the words of John 15: 1-8. (The picture is from Switzerland, having rode through the hillside vineyards).

Over twenty years ago we acquired five gooseberry bushes, which produced extremely large sweet gooseberries, they were very good fruit in fact. We got them from a neighbour, down the street, who was intending to dig them up, to throw on a fire in their back garden. According to them they never had any fruit from the bushes, unlike their next-door neighbours, which wasn’t entirely true!

The truth was, every year when they went on their two-week holiday, their neighbour would climb over the fence, and pick the new gooseberries. They would then bring some of them round as a gift, never telling them where they had come from. This came out long after the family had moved away, so they never found out, that the gift of the gooseberries was in reality their own. So that’s how we acquired the bushes.

However, when we first planted them, because they were old, I pruned them back. In fact, my wife thought I had over pruned them, as I had chopped them down to their base. But what looked like dead bushes, exploded into life, giving us a superb crop, year after year.

This story from my past, resonated with this passage from John. Here, Jesus describes himself as the ‘true vine’, the source of life, the only way we are able to bear fruit. Every vine needs a gardener, and Jesus tells us that the gardener is not himself, but the Father. The two work together, to produce good fruit in us. Therefore, the Father, as the gardener checks each branch to see if it is healthy and clean, to see if it has produced any fruit. If it hasn’t it is cut off, if it has, the Father prunes that branch back, to help it to be more fruitful.

The sensation can feel the same, it can be painful, disorientating, and leave us wondering what we did wrong. But the sole purpose of the vine is to produce much fruit, and verse eight tells us that this fruit, glorifies the Father, but also identifies us as Jesus’ disciples.

Pruning may be painful, but it is done out of love, out of hope for our full potential, out of a recognition that we are healthy branches. It acknowledges that we can withstand the necessary care, that will enable us to flourish, that we are stronger than we think.

Although the fruit emerges from the branch, it is not created by the branch itself. In fact, Jesus states clearly, ‘apart from me you can do nothing’. I think this is the most significant aspect of Jesus’ analogy. For a gooseberry bush, or a grape vine, the same principle follows, that the branch can only produce what the vine allows it to. The vine nourishes the branches, draws and sends life giving sap into their very core, holds them up, and supports them.

We cannot afford not to remain in Christ, just as the branches remain in the vine. Like the sap that runs from the vine, we need the Holy Spirit to enable us to live Godly lives, to be reminded of Christ’s words, to guide us to the places he would have us go.

We need to ensure we are spending time with Christ, listening for his voice, building our relationship through prayer, abiding in him, so that we may go out and produce much fruit to the Glory of God the Father.
Nigel (Malty) – United Kingdom Central chapter