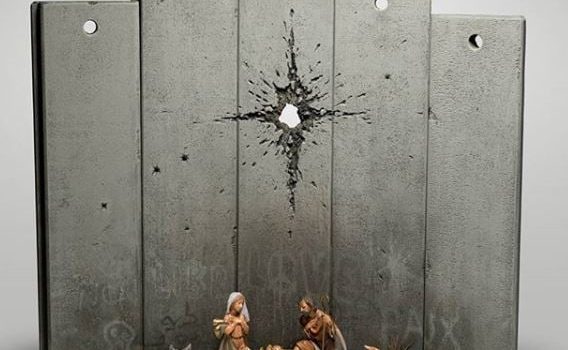 Today’s text is from Luke, 2:1-14, the story of Jesus’ birth in Bethlehem, you have all heard it, whether you count yourself as Christian or not. It’s the story that is read in schools, churches, homes, gatherings and so on, to give us the reason for the season. The cozy story of how our Saviour was born into this world as a small child, a peaceful and serene scene. But honestly, if that is what you hear, I think you are reading it wrong, or at least cherry-picking a bit. As the story continues, it is the story of a cold world, of tyrants and emperors, money and power, greed and violence and death, persecution and refugees, but also of hope in the midst of it all.

Imagine Jesus being born in our time. Bethlehem lies in the Westbank, the contested area of Palestinians and Jews, a long ongoing, unresolved conflict. His parents forced to travel because of the conflict, she being Palestinian, he Jewish, ill seen by both sides, unable to find shelter and finally they hide in a shed alongside the wall built by the authorities. Equally afraid of the soldiers patrolling the streets as of the fighters trying to launch their rockets.

Once born, he will have to flee to avoid persecution and ends up in a refugee camp in Syria, close to the Turkish border. Nobody wants them, the European countries are afraid of terrorists, even of the children who might be future terrorists, and yes, Jesus most likely looked like the average Arab and potential terrorist in the eyes of the western world. Turkey does not want them and is making that very clear by the way they treat the refugees, Syria is in shambles with no safety for anyone. The human rights that were once written with the Christian values as the core base, are more often talked about as a nuisance that would require the western countries to act, and are therefore frowned upon by many. And in the midst of all this mayhem, we find our saviour. Would we know him? Would we see him for who he is?

See, Jesus is sneaky like that. He challenges us to see past all the glamour, power and glory. He comes to us as the least of us, challenging us to see with our hearts, to see with a heart filled with love, not fear, not cynicism, not cold logic. It challenges us to see the world as He sees it. And so the question remains, would we know him, would I know him? What is my heart actually filled with? What does it actually mean to put “Christ back into Christmas”? Will I give in to Jesus and let Him fill my heart with hope?

A merry Christ-mas to you all, sisters and brothers.