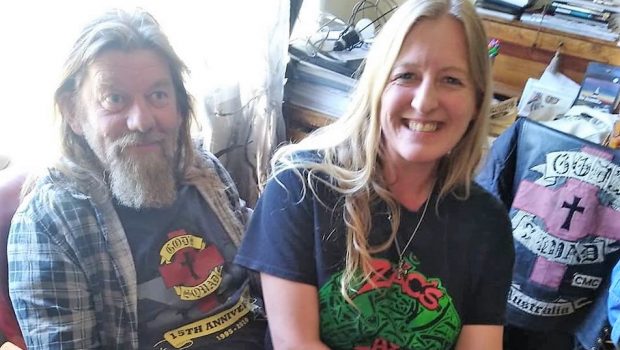 Hey, my name is Renea and I’m part of God’s Squad here in Glenrowan, Australia.

As God’s Squad we are about the Jesus story. Today I am looking at Matthew 8, right at the end where he heals the demon-possessed man.

By this time in Jesus’ life he is becoming well known in his area. He has turned the water into wine at the wedding, healed sick and possessed people and spoken to the crowds. He has started to teach about the
different kingdom God would have us follow and began upsetting the religious leaders by doing so.

Then one day as he is teaching, he looks up and notices how big the crowd has become. Unlike today’s would-be leaders, he gets into a boat and sails to the other side of the lake.

He is met on the shore by two demon-possessed men who live in nearby caves. The same story is told in some of the other gospels and it would seem that this guy, or guys, has caused all sorts of trouble. It says,
“They were so violent that no one could pass that way.”

So, the possessed man fronts Jesus and demands to know why he has come- ‘before the appointed time.’ He asks who the demons are and tells them to leave. They ‘plead’ with him not to send them to the abyss rather let them enter the herd of nearby pigs! Jesus says ok, they enter the pigs then promptly run off a cliff into the lake and drown.

All very dramatic. But we are left with a man with no demons!

So, the pig farmer runs into town to tell everyone what happened. (No facebook it seems) Then the whole town came out to see for themselves. What they do find is the man-dressed and in his right mind talking
with Jesus. The farmer tells the story again-making a point of the lost pigs. The town looks at the man healed- and does what?

They see the healed man for sure, but they also see the lost income and decide that Jesus is too much trouble! Look at how much carnage he brought in one day. Good or not, he was dangerous. Jesus had to go! The
story is about two different groups of people-one who was changed by Jesus and one who didn’t want change-especially if it costs.

During the last few months for us now, with all kinds of stress and change, our lives have all been turned upside down. What was normal is a memory as we decide what will become our new normal. One of the things about our Christian faith is we are given an opportunity to change. Like the possessed man forgiven and allowed to start again.

However, there is always a cost. Could be time, could be money or things, could be changed priorities. Jesus, then and now, is always about bringing positive change, but it isn’t always easy to follow him. We can, like the town in the story, refuse Jesus when he calls us to change.

The challenge from Jesus- maybe whispered to you during this unusual time, will come at a cost we aren’t always keen to pay. But this challenge will bring change that…like the Matthew story… will be a huge benefit
both to us and those close to us.

I recently read a quote from an American football coach. When asked how he turns strong individuals into a winning team, he said, ‘My job is to get men to do what they don’t want to do, in order to achieve what they have always wanted to achieve.’ That might just be where you are now.
Cheers,
Renea – Pacific president, God’s Squad CMC