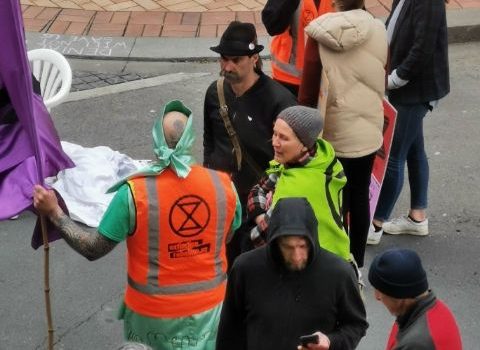 Nga mihi mahana e hoa ma, warm greetings friends. This week our gospel is again from Luke 11, but verses 42-46 this time. A few lines describing Jesus speaking to the pharisees and then a lawyer who interjects! Jesus really is attacking them today……but why?

In the Matthew and Mark versions of Jesus saying these words he is in the public space of the temple courts. Luke sets many of his stories around meals or parties so today he takes us inside a pharisee’s house. Jesus has been outside but forgets to wash his hands before eating, which surprises his host. This surprise must have been obvious, maybe the pharisee asked why? Jesus replies with a tirade of the failings of his hosts social group. You pay all your taxes, but you forget to live justly. You look for position and privilege, and as you do this you deal out death and destruction!

A lawyer who was there chimes in and is also tuned up by Jesus. These people were not just the religious elite, checking up on people’s moral and spiritual health – they ran a corrupt racket based on the way they, and their ancestors, had codified what following “God’s laws” looked like. They managed the temple sacrifice system, supplied the sacrifices and creamed the profits. As they did this the less powerful stacked up debt and became less able to follow the rules, requiring more sacrifices and more debt. A terrible cycle of vicious poverty followed in its wake for the peasant farmers and day labourers of the time.

Since Barro wrote about the communal implications of the “Our Father’ prayer last week we have had some more teaching on prayer, followed by a curious phrase about a ‘stronger man entering a strong man’s house and sharing out the spoil’. Jesus is that ‘stronger man’ in a strong man’s house today seeking to share out the spoil that the lawyer will not.

After our scene today fully plays out Luke takes Jesus back out onto the street, to speak to thousands of people treading on each other! Jesus gives the same speech to this crowd, but from the other side of the coin. Watch out for these pharisees, do not be afraid of them and even when they take you to court – do not worry! God and I know what life is like for you, we love you and want our Kingdom to be real in your life now……be encouraged, hang in there – we can see how these privileged elite treat you.

Over the last ten days right around the world, thousands of people have been taking to the streets and speaking truth to the ‘strong people’ of our day. We are tired of having corporations undermine our efforts at caring for the earth, caring about our neighbours and their well being – most people do reduce, reuse and recycle things and grow a few veges if they can and share what they have – but these things are not enough when fancy fat corporations pollute and despoil the earth. The biggest user of coal in NZ is a dairy company that exports 90% of its produce as milk powder, we don’t even consume their products here! We are listening to Jesus and are not afraid to be arrested and taken to court because we no longer want to live the way they pressure us to.

Who are the people looking good and slick today sitting in the places of honour, but who actually deal in death and destruction (you are like unmarked graves full of dead bones!). Who are the ones who load us up with unendurable burdens and refuse to lift them from us? It is these people who are the ‘pharisees and lawyers’ that Luke tells us about today.

May we be found doing more than praying, by joining Jesus in the call for transformation. May we show what we believe by actually doing it. Let’s encourage those on the road with us to not be afraid of ‘strong people’ but seek ways to liberate their spoils so that love, justice and mercy – the marks of the Kingdom of God – flow and people have a chance to live well.

These are harsh words from Jesus today, we do not want to misunderstand them or misuse them. But as his followers we must engage with them. Jesus began his road trip out in the provinces and is now close to the Jerusalem city centre, to the centre of power in his world. It is to the cities this week that people have journeyed to again take up this call to act justly and fairly, to make decisions that lift burdens from people and make life possible. To love our neighbours. This is the same struggle – can we hear the voice of Jesus calling us to life in all its fullness, to love our neighbour despite the lure and opulence of the ‘strong’ that ultimately leads to death or debt

I read a while ago that following Jesus and going on the spiritual journey was not for the faint hearted, and that it was a journey once started that you dare not complete! These are big issues this week, this century, that tear at our hearts, tax our minds and challenge our allegiances. Let’s encourage each other to stick with Jesus, to be wary of the voice of power and choose to love, to be merciful and pray to our Father ‘your kingdom come quickly’.

Our picture today is my wife and I with a good friend at the XR action in Wellington last week. Those two were arrested after I went home to cook tea